One of my most personal encounters with a scorpion was of all places at the checkout counter of a mini-mart/ gas station in Panamint Springs, California. Panamint Springs Resort is a remote oasis along the way into Death Valley’s western border.

We fueled up our 4×4 truck there and I went in to pay for the exorbitantly priced gas. This little market in the middle of nowhere has fun tourist trap items such as rubbery fake snakes and bugs, as well as essentials for the traveling camper, like ice, drinks and toilet paper.

Scorpions are a mix of lobsters, spiders, wasps, and nightmares.” ~Internet meme

As I stood waiting at the checkout counter I started to set down my items for purchase and quickly stepped back. What I thought was a toy rubber scorpion on display on the countertop, MOVED! The front pinchers came up and its legs moved slightly forward, and then resumed being motionless.

I frantically motioned to the cashier that he might want to take a closer look at what was really on his countertop. He saw the look on my face, flashed me a smile, then reached over and picked up his little pet by the tail curled over its back. 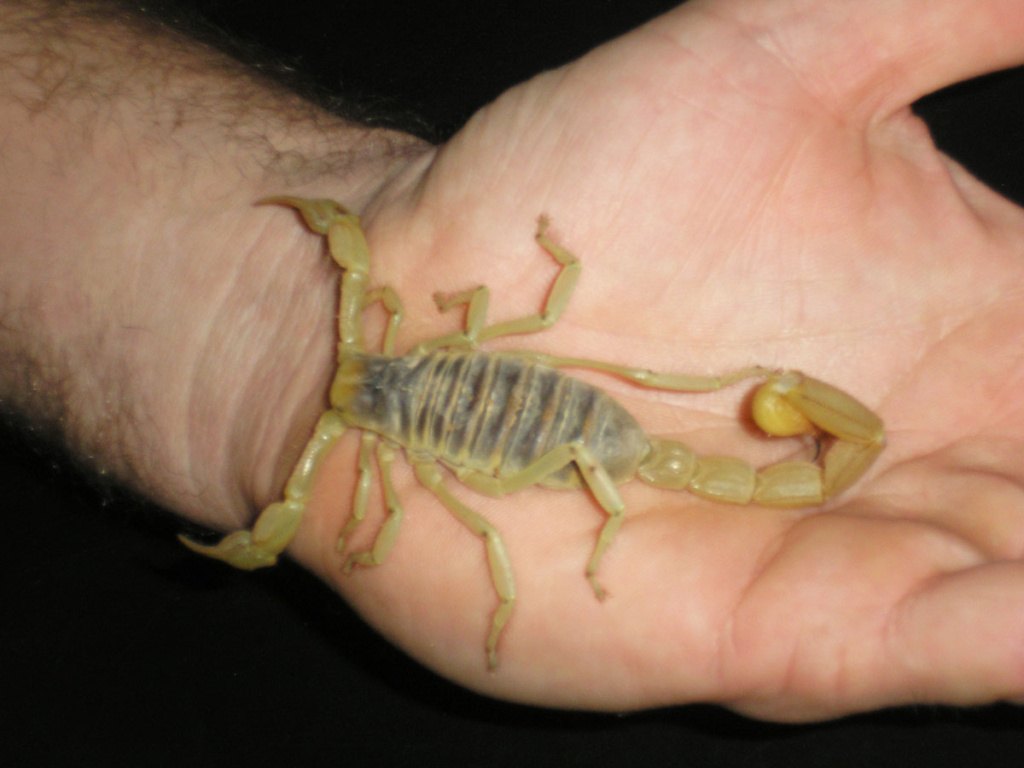 He then introduced me to a Giant Hairy Scorpion and asked if I would like to hold her. Don’t ask me how to tell the sex, but I was told this pretty specimen was female. Another customer had come in with her young son who was intrigued by her formidable presence. I quickly raced outside to invite my hubby to come in and take a look.

My husband, Pres was much braver than I, and he accepted the offer to hold the queen scorpion. He tried not to flinch as her little claws (at the end of each of her 8 legs), dug in to “hold on” to the skin on this hand. It was of course not painful, just unexpected.

Next, the scorpion wrangler invited us, along with Pres to carry her, into the large and very dark restroom…..I know this is starting to sound like a creepy murder mystery. After closing the door with us standing in the darkness, our host then turned on a black light. We all gasped in admiration as the scorpion was glowing an eerie fluorescent green in the dark!

Photo courtesy of Skeeze at Pixabay.com

Glowing in the dark

We then learned that under UV light (such as a black light), scorpions will glow due to the presence of fluorescent chemicals in their exoskeleton. Here is a link with more info behind the science.

That experience sold us on keeping a blacklight type flashlight with us on trips to the desert, to detect scorpions lurking near our campsite at night. This is especially important if you have to make a trip to an outhouse or nearby bush in the dark.

Get your own powerful UV flashlight at my affiliate link here.

We have uncovered scorpions by accident when overturning rocks or moving loose debris that provides a nice hideout for them. We keep a pair of leather gloves in the truck to protect our hands from an unwanted sting or bite. These arachnids can survive very hostile environments.

One of my fun facts posted on Pinterest for your own pinning.

Cringe alert! I found recipes for Texas battered and sauteed scorpions (seems butter and garlic make them delicious), as well as deep-fried scorpion. I will clean, cook and eat rattlesnake, but have to draw the line with scorpions!

For a unique candy treat, give these flavored scorpion suckers a try. Sorry, I will not be taste testing these so I won’t personally vouch for them as a delicacy. However, here is a link for the brave and you can let me know how you like them.

More fascinating facts with great photos about scorpions can be found at Thoughtco.com. However, I don’t suggest this for bedtime reading.

While researching about scorpions, I learned that some folks actually like to hunt and study them. I enjoyed this informative video about an avid scorpion hunter and researcher by ABC News:

Teens from California discovered a new species of scorpion only found at the alkali lake at Carrizo Plains National Monument. Read how they found and named the Paruroctonus soda.

Carrizo seems desolate yet offers all kinds of wildlife including the kangaroo rat, antelope, kit fox, shrimp and bats.  Bird life flocks to Soda Lake when the winter rains bring new life to the area. We love to come visit during the wildflower bloom in early Spring.

Previous Post: « Proven best tips for how to research where to find great campsites
Next Post: Camping – how 5 main classes will better define your favorite ways to camp »